Headed out to Phoenix, AZ early Tuesday morning for the 2015 Cactus Classic. I landed around 8am and we headed straight to the track to start practice. I am racing Mod Truck, 2wd Mod SC, 2wd Mod Buggy, and 4wd Mod Buggy.

This year is the first time for the Cactus to go indoor. The facility is nice, but it doesn’t have the normal vibe, it’s just not the same. At first glance, the track looks simple, but the surface is very high grip, and a little bit wavy, so it made it more difficult than it looks at first glance.

At the new SRS, slicks are the tire of choice. Joe is grinding down my Truck and SC AKA tires for practice.

AKA brought out there new pre made slicks for 2wd and 4wd buggies.

The track was crazy grippy to start practice, so most people were scrambling to get there cars easier to drive. 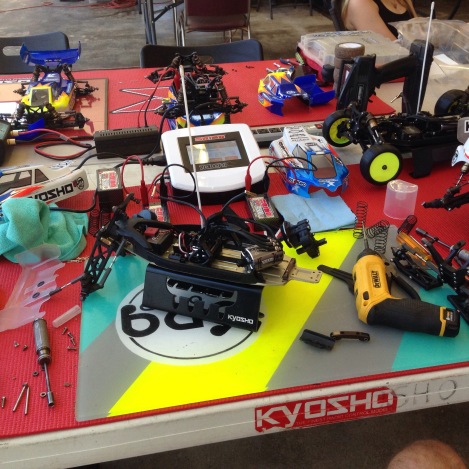 Here is my RB6 getting changed around searching for a safer feeling. Tuesday and the first half of Wednesday was open practice. Later half of Wednesday we would have one round of controlled practice, then Thursday we would have two rounds of controlled seeding practice. The three days of practice would see three different track conditions. Tuesday was crazy traction, Wednesday the track changed the most. The track started to dry out and create some rolled up clay marbles, and the traction was very inconsistent. The track crew went from watering every three heats, to every two heats, but it was still bad. Towards the end of Wednesday they had to water, and sweep for every heat. This change would add four hours to the program each day.

Seeding practice would be very close between a lot of drivers. Also the track crew was working to get the track consistent. For P1 they were still watering every two heats, but the lap times were .5 of a second slower in the heat without water. All my P1 heats were the dry heats, so I needed my good times in P2. All four of my cars were feeling pretty good, so I just needed three good Laps in a row. I seeded in all the top heats.

For qualifying I busted out my TD bodies and had new truck and SC bodies fresh from Japan. They looked absolutely amazing as usual.
Q1 started out great with really clean runs in Truck and SC. I got the TQ in both those classes in Q1. 2wd was also going great, with Tessman, Cavalieri, and myself within a second for most of the heat. I lead most of it, and was leading with two laps to go, when I clipped a crashed car. I ended up 3rd. 4wd also went awesome, as I finished a close 2nd for the the round. 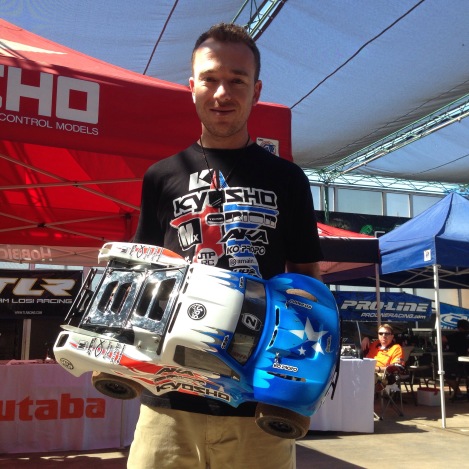 Q2 the traction level seemed to change a little. My truck run wasn’t as smooth as the first run, as I made some mistakes and got 4th. SC was great and I drove well to take another TQ. 2wd was interesting, TY completely smoked the field, with me and Cav really close on time, and I got 3rd again. 4wd was a little rough, as I made some mistakes and finished 10th. The race program was long with sweeping and water for all 86 races. We left the track around 10:30pm, so it was a long day. 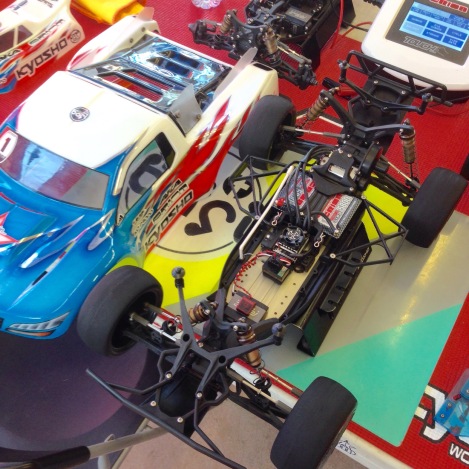 Saturday was Q3 and Q4, and I had the opportunity to have great starting spots in all four classes. Truck was the first class up, and I needed a good run to go with my Q1 TQ, but I didn’t have it. I made a few mistakes and got 5th. It felt like I’m loosing the track a little, as I couldn’t flow around the track very well. Next was SC, and if I got the TQ, then it would lock up the overall TQ. I had a great run and felt comfortable, grabbing the TQ.

That gave me some confidence after my rough truck run. Next was 2wd. It was a pretty rough run. Last class in Q3 was 4wd. My ZX6 felt amazing and I had a great run. Me, Cav, and Phend were all close on time, I lost a little ground in the middle, but then with a couple laps to go, Cav crashed. I took the TQ.

Q4 wasn’t really all that good in any car. The day ended great though as I ended up tied on points with Phend in 4wd, for the TQ. The tie breaker is your laps and times added together from your two best points. I won the tie by 1/1000th of a second, so that was pretty exciting. The track seemed to be getting away from me setup wise, so I had some big changes planned on all my cars. I ended up getting TQ in SC and 4wd, then 3rd in Truck, and 4th in 2wd.

Sunday morning Joe and I had some awesome team work going. He would disassemble, and I would make the changes. We got all the cars ready and it was A1 time.

SC
A1: This was my first main of the day, and it would be rough. My truck felt ok, but not great. I lead early, then got loose at the end of the straight, giving the lead to Maifield. The next lap, I would land hard off the triple and break my front shock tower.
A2: I got off to a great start, and I had to beat Maifield if I wanted a shot to win. I was staying really close to him for the first couple minutes, but then a mistake would drop me way back in the pack. I tried to come back through, but passing was impossible, so I finished 5th.
A3: I made a big rear end setup change and my truck felt amazing. I ran a clean race and took the win, setting a faster main time that was 3 seconds faster than Maifields best time. It was just a couple races too late. With my rough A1 and A2, I was still able to finish 3rd overall.

Truck
A1: I got a good start, but I felt really uncomfortable on the track. Everyone around me, except Maifield who was leading, was crashing. Somehow I hung on to finish 2nd.
A2: I again didn’t feel very comfortable driving around. I was trying my best, but ended up crashing off the triple and dropping back. I ended in 5th.
A3: This main was just like A2, I didn’t feel super fast, and I needed to just drive smart and drive good to hold my position. I wasn’t driving good and crashed again. I finished 4th, and ended up 3rd overall. 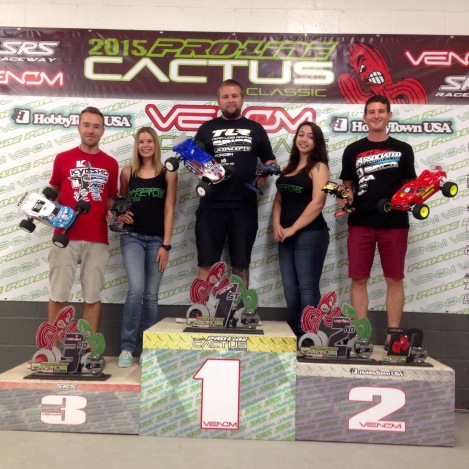 2wd
A1: This was a wild race. My car felt amazing and I was finally driving good. I got a good start and was patient, moving up one spot at a time. By halfway, I was in second and catching Cav pretty fast. I did the double before the straight perfect and flew by him on the straight taking the lead. Then Cav crashed and I had a huge lead. With two laps to go, I had a really weird mistake. I was just driving around, not worried at all, I hit the double before the triple, and my tires seemed to just spin up the face. I cased the double nose first, not even close, and went to third. I couldn’t believe it. The last lap was wild as the top three were real close, Lee was leading and crashed, so I finished 2nd.
A2: Again my car felt awesome, but I had a huge mistake early. I got a little wild at the end of the straight, almost had it saved, but then swapped off the little roller and crashed. I went way back, and struggled to come through the pack. I finished 8th.
A3: I made a suspension setup change for the final race, hoping to make my car safer, but I think it made it harder to drive. I had an outside chance to win the overall, but I had to win A3. I got a great start, but we all stayed in order for a while. Cav, Spencer, me, Lee, David were all really close around halfway. Spencer made a little mistake, I tried to adjust my car, and I ended up casing the double before the straight and crashing. I dropped to 5th and finished there. I finished 5th overall too, which was very disappointing. My 2wd felt very good and deserved to be better than that.

4wd
A1: My 4wd felt awesome in A1. I had a good start and held off Phend early, the Cav caught me. He put a good pass on me after the triple, and I stayed right on his wing. With two laps to go, I clipped a turn and crashed. I ran first or second the whole race, and that crash dropped me to 6th.
A2: I wanted some revenge after the end of A1. I held the lead for the first three minutes, with Cav all over me. He jumped to the inside after the triple, clipped me, which actually flipped me, and then took off. I thought he should have gave the spot back, as I didn’t go wide or anything. I tried my best to catch him, but couldn’t. I finished 2nd.
A3: I needed to win to make sure I finished 2nd. Phend was all over me early, then I pulled a small lead. I was feeling great, then with a few laps to go, Phend charged hard and caught me. He was really close and trying pass everywhere. I was just wanting to drive really tight and not give him an inside. On the last lap, I jumped a little too tight on the step on, slipped the turn, then Phend clipped me and he crashed. I took the win and 2nd overall.

The weekend was a success I feel, I was fast, my cars drove good, but no wins. I felt like a let a few things get away, missed my setups a little with the track changing some. I also needed to drive a little better at times. Thanks to all my fans, my family for all their support, Joe Pillars for all his hard word, all my great sponsors, and the Good Lord Jesus Christ for my amazing racing career. Kyosho, Team Orion, AKA, Ko Propo, Mx, JTP, Amain.com, Upgrade-RC, TD Paint, Lunsford, MIP, LiveRC.com, Bike Source, Specialized Bikes, and Rock Brook Church.

See you guys at the next race!