I can’t believe it is already time for the 2015 ROAR Fuel Nationals. I have had a great 1/8 year so far, and I’m very excited for this race, and to try to bring home a National Championship. I flew into Sacramento, CA, then Joe and I took on the 1.5 hour drive up to Chico, CA. We arrived at the Silver Dollar Raceway and checked out the track. The dirt looked like concrete, looked super hard, super dry, and pretty slick. It looked very similar to the Pre-Worlds for 1/10 in 2013. Track layout looked good, lots of elevation change.

Wednesday would be the first day we would hit the track, with some open practice in the morning, followed by three, 5 minute runs in the heat order. First few runs on the track were pretty good, but I was trying a lot of things for setup. The track was slick, but also had a high grip feeling with the fast sweeping layout. Slowly the track was gaining traction, but it was still pretty low.

Thursday would be the official first day of the ROAR event, with two rounds of 7 minute seeding runs. Up first would be truggy. My KYOSHO  STRR EVO.2 has been working really good all of 2015, so I was looking forward to racing this class as well. First seeding run went pretty good, I was 5th fastest, but in the second session, most other drivers gained speed, and I didn’t, I seeded 9th. My truck felt good around the track, I was just off on the lap time, losing time between obstacles, not having the quick acceleration I need. Buggy would be very similar, my car felt good, but my speed just wasn’t great. I felt like I was losing my time in the same spots as truggy, between the jumps. I seeded 9th in buggy as well.

Friday is Day 1 of 2 qualifying days. ROAR now does a short, 3 minute practice in heat order every morning, to make sure everything is working, and break in the track. It’s nice if you want to try any setup changes, and not risk a bad qualifier.

Truggy was up first. I had a really clean run, but just off pace, I got 7th for the round. I was happy I drove good, but frustrated that a clean run was only 7th…..I need more speed somehow. Buggy was better and worse. I had some speed, was running up towards the front of the heat, then crashed, dropped back a little, charged back up some, and then…..I hit the dreaded cones right before the finish line to start my last lap. I went from, going to be 4th, to finishing 11th for the round.

Q2 didn’t really get any better. Truggy I was the same speed as Q1, but didn’t have the same clean run, so I finished 23rd for the round. Again in buggy I had more speed than truggy, running up front and even leading the heat for a little bit, but mistakes got me. Two crashes dropped me from fighting for TQ, to finishing 12th for the round. After the end of the day, I found something that was hurting my performance for both classes, so I was sure to have a better day on Saturday.

Q3 and Q4 were going to be key for me to get my ROAR Nats back on track, the morning practice went pretty good, and I was ready. Truggy Q3 went really good, as I had a little more speed than I have had all week, and had a pretty clean run, taking a 4th for the round. My truck still felt like it wouldn’t pull between jumps, like it was slipping. I have changed diff oils like crazy, but just couldn’t get the slipping feel to go away. Q3 of buggy would also be a pretty good run. I was in the B-main resort after getting two runs outside the top 10 in Q1 and Q2, but the traffic was good. I had ok speed, but clipped the cones and lost a couple of seconds during my run, getting a 6th for the round.

Q4 would be the last chance to get the speed I’ve been missing, and my last chance to find any setup help before the real racing starts on Sunday. Truggy would prove to be a disaster. My truck felt the best it has all week, but my lap times were just too slow, I was frustrated and ended up with a 6th for the round. I just could not get my truck to accelerate hard, my engine was tuned perfect and running amazing, but my truck just wouldn’t go, and I was getting very frustrated. I qualified 7th overall in Truggy. Buggy would be similar. My car felt ok, but like truggy, I was just not fast enough, I also had a couple HUGE mistakes. It would be a rough run and I would finish 19th for the round and qualify 11th overall. That would make me start 5th in the even Semi Final on Sunday. 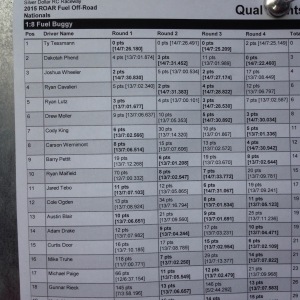 Saturday was also a SMOKING HOT day, I was exhausted, pretty not happy with my qualifying, and ready for some rest.

Sunday was finally here and it was race time. We had warm up’s for both the truggy A-main and the buggy Semi’s. I changed my rear diff oil in my truggy before the warm up….that was my 15th time changing diff oil for the week with both cars! I tested some tires in both warm ups. My cars felt pretty good, not as fast as I needed them to be to win, but that was what I had to race. I was feeling positive and ready to push through and race as hard as I could.

Truggy Main was up first. I started 7th and had a pretty good start, slowly making my way forward. I was pitting at 9 minutes, and a few guys were pitting at 7.5 minutes, so I would pass a couple of drivers, then move back after the stops shuffled. Around halfway through the 45 minute final, Cav and I had a great battle going for 4th. We raced each other pretty much the whole race up to this point, and we were on the same pit schedule, even our pit crews were racing each other. I knew the best I could finish would be 4th, and we were fighting hard. It took me a good 15 minutes being behind Cav to finally get a pass made and move into 4th, with about 5 – 10 minutes to go. I drove a near perfect race up till that point, but then in the final couple minutes, I let my race go with two HUGE mistakes. I just barely clipped the cones at the finish line two laps, almost back to back laps, and I fell from 4th to 6th. That’s where I would finish, which was very disappointing. I knew I wasn’t going to have the speed to win, but I wanted to have the best race possible, I would have been happy to finish the race clean and take a 4th. 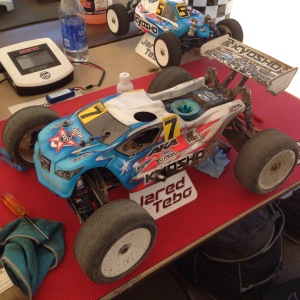 Next up was the Buggy Semi. I was in the even semi, after the TQ gets moved directly to the Main. I had a pretty bad start as there was a tangle in front of me going intro the first turn. I went wide trying to get by, but got clipped by the tangled car. Luckily I only lost a few spots and was around 8th or so on the first lap. My car felt pretty good and I was able to come through the pack and get into 3rd pretty quick. I also started to make up ground on the two lead cars. Every time I would get close to them, I would make a mistake and lose time. I ended up coming home in 3rd. My time was pretty decent, so I would start 6th in the Main after they combined the times of the two semi’s.

For the buggy main I made a couple of setup changes. I went back to my shock package I had in Q1 and Q2, that seemed to ber the time I had the most speed. My tires were also pretty worn after the semi, so we mounted up the medium compound for the main. I had a good start and was feeling pretty comfortable at the beginning of the race. I didn’t have the pace to win, but I felt like a podium was possible. About 10 minutes in, my car got much harder to drive, and I realized I should have left my shocks along after the semi, and now my car was a little worse than before. I just told myself to drive smooth, drive consistent, and let the race come to me. My goal was 60 minutes with no crashes. Phend ended up having issues about 10 minutes in and then Maifield as well. Around 20 minutes in I had settled into 3rd and was feeling ok, but the race seemed to be going by REALLY REALLY slow, this was going to be a long 60 minutes. By the 45 minute mark, the top 3 were all pretty spread out, Ty had about 15 seconds on Cav, and I was another 15 or so seconds back from Cav, and then 4th was another 15 seconds back from me. I was content with 3rd and just wanted to end out the race smooth. I could feel my tires getting pretty bald with 10 minutes to go, but I did a good job of staying in the groove and driving safe. With about 5 minutes left, I started to get closer to Cav, only about 9 seconds back, as he was struggling with bald tires too. I wanted to capitalize on it, but instead I started to make mistakes and lost over 10 seconds to 4th, and I really didn’t want to lose my podium. Luckily I was able to get around the last couple laps and finish 3rd. I was happy to end a rough weekend with a 3rd, keep my podium streak going for 2015, but I was very disappointed I had no chance of winning either class all weekend. That’s always my goal, to feel like I have a chance to win. 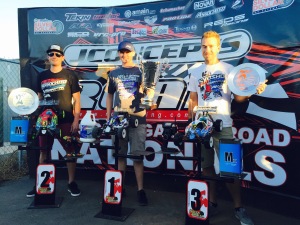