With just a couple of days between the Cactus Classic and the Silver State, I was back at it, this time in Las Vegas. In 2015 the track was at a new venue, RC Tracks of Las Vegas. The surface was different from the past track in Boulder City, but the track was still ran wet and got rough come the mains. I had a great 2015 with wins in the Nitro Buggy and Electric buggy classes, and 3rd in Truggy.

2016 would be a much different Silver State than any other ever ran before. RC Tracks of Las Vegas is hosting the IFMAR World Championships later this year, and they are working on getting a surface that is desired by the racers, manufacturers, track owners, city officials, and surrounding business areas…..not an easy task. Most RC tracks are in the middle of nowhere, this new track is right next to the Las Vegas Strip and Las Vegas International airport, which sounds great, but comes with extra baggage.

The track was built very smooth and then sealed with a special mixture of…..I’m not sure. The result was a super high grip, super fast, freeway of a 1/8 off-road track. Some liked it, some loved it, some didn’t care, some hated it, EVERYONE talked about it. For me, racing is my job, the track is my work area, I will do my job on any track. I really enjoy the rough tracks, but I also really enjoy driving the cars with high traction, I was there to race, and that is all!

Kyosho also just released the new Kyosho MP9 TKI4 for this race. As I was racing 1/10 the weekend before, I had no time with the car and Thursday practice would be my first laps with the updated version of the Kyosho MP9.

Thursday would be the first day of on track action. The practice was organized into timed sessions and used a coupon system. You get 2 coupons for the Pro classes and 3 for the non Pro classes. There would be one seeding run for Pro classes only and you had to use 1 coupon for your seeding run. It was a great idea, but it was a little confusing, not properly explained, and not properly supervised. There was of course your certain drivers that can’t follow the rules and ran certain cars more than they were supposed to, using certain class coupons for the wrong classes, or just using other people coupons all together. Either way, the track caught me WAY off guard. I was not expecting the track to be so high traction and had all 3 of my cars setup for a looser track condition. I ran through all my coupons and got a decent feel of the track, but was changing setups on all 3 cars most of the day. Only the Nitro classes were seeded, and I was 10th in Nitro Buggy and 12th in Nitro Truggy. The track was a pretty simple layout and was super fast….not my best style of track, but I was figuring it out.

Friday would be Q1 and Q2. Electric Buggy would start the day out and Q1 wasn’t great at all. I had decent speed, but made a mistake and needed a marshal. With the high speeds and close lap times, mistakes cost you big time, and I would get 11th. Truggy was next and the result was similar, not a good run at all and ended up 12th. Nitro buggy was the last class, and just like the others, I didn’t have great speed and I crashed, putting me 10th. For Q2 I was making some setup changes to all of my cars, searching for more speed. In Electric Buggy I had great speed and was actually leading the heat for a while, looking at getting the TQ. A late race crash dropped me back, but I finally had some lap time speed, I finished 8th for the round. Truggy I also gained speed and had a clean run. I was much faster than Q1 and took 2nd for the round. I made similar changes to my Nitro Buggy as I did to my Electric and was excited for the final run of the day. I had good speed again and was leading the heat, but it didn’t last long as mistakes would kill my run. I was setting the pace to get the TQ and then had two really long crashes. I was having a hard time driving hard, pushing hard where I could, but then driving safe in the other areas of the track. You had to push hard to get fast laps, but silly mistakes would lead into crashes. I finished 14th for the round.

Saturday would be the final round of qualifying and then lower Finals would run into the night. My Dad showed up in the morning to watch and hang out, so that was a great start to the day. Electric Buggy would be similar Q2, I found my speed, I was turning fast laps and lead some of the qualifier, but I could do it the entire race length. I crashed and finished 7th, which put me 9th overall for the mains. Truggy was next and I needed a good run to go with my 2nd to give me a good starting position. The times were super close and I had a decent run to finish 5th and give me 4th starting position for the main. Nitro Buggy was last and I had no real good runs, I needed to be fast and smooth and get the best run possible to make sure I would be in the A Main. Times were really close just like Truggy, and a mistake cost me the TQ, but I managed a 4th and would start 7th in the main.

Sunday was here and that meant…..it was race day. I had another special guest join Team JTP for the day….Scott Speed. 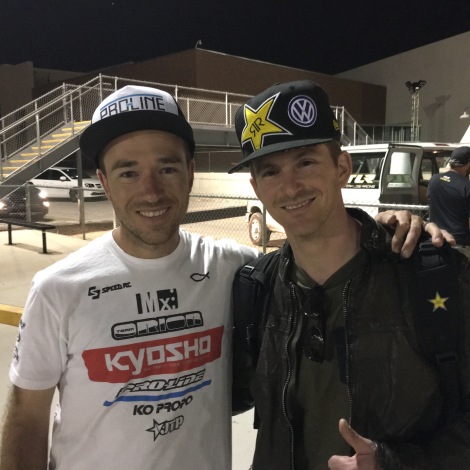 Electric Buggy was the first race for me. I was starting 9th, but I had much more speed than that. I needed a great start and to have a clean 10 minutes. I had an AMAZING lap 1 and made a bunch of passes, was running 4th when I came onto the straight. We were all in a tight pack and me and Lutz got together when he messed up the double double, I got sent into the pit lane pipe and had to drive through pit lane. I went from 9th to 4th to 14th all on Lap 1. I didn’t give up and just started making my way through the pack. I was feeling good and making passes, getting closer and closer to the front. Maifield also had a bad start, he was behind me and making his way through the field as well. There was this back table top to a small step jump into a berm….the line was just to jump the table, then jump the step into the berm, but Maifield started blasting the whole section in one jump. He was passing a car a lap it seemed, and was catching me in the process. I was a little mad and was thinking about it too much, I made a mistake and let him get right behind me as we were coming into that section. I had two choices…I could either continue driving around in 5th, get jumped over, and finish 6th, or just go for the jump, keep Maifield behind me, and risk it all for a possible podium finish. At the last second, I decided to go big, we both flew that huge quad and we both landed perfect, everybody around the track was cheering and the new race for me just started. There was only a few minutes left and I put in my charge. Maifield ended up crashing, so I had no pressure and charged forward, Jumping passed Bornhorst for 4th and then reeling in McBride in 3rd. McBride crashed on the last lap and I moved into 3rd, taking the final podium spot. I’m not normally happy with 3rd, but that was a really fun race and I was happy with my driving. 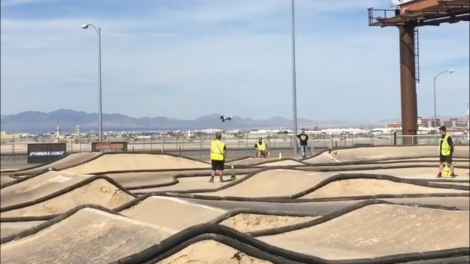 Truggy was next. I wasn’t sure with what tires to run, track was abrasive, but when I tried the larger Proline Blockade in the A Main practice, my truck didn’t drive good. I decided to risk it and run the smaller Proline Holeshot hoping to have a fast pace early and then just survive the end on bald tires. Right before the start I realized when I changed shock pistons that I put the wrong ones in, and that was why my truck felt so bad on the bigger tire, but it was too late to change tires. My truck felt amazing at the start, but we were all racing super hard and I couldn’t get to the very front like I needed to with my tire strategy. Only 15 minutes into the 45 minute main, I noticed my tires starting to go bald in the centers. The risk didn’t pay off and I struggled for most of that main, and came home in 5th.

Nitro Buggy was last. I was ready for the main and had a better tire strategy than in Truggy. I was starting 7th and needed to move up quickly to have any chance at winning. I got a pretty good start and the top 5 or so were pretty close early. I wasn’t able to stay close as I would make multiple mistakes in the same section all through the main. There was a weird angled double in the center of the track. I just couldn’t jump that consistently if my life depended on it. I would either jump too wide, or jump too tight, both resulting in crash in most cases. I finished 5th and I wasn’t happy with my performance. I had got more speed during the week, my new MP9 TKI4 was feeling better and better, but I struggled with that one specific section the entire main.

It would be another quick turnaround as I would only go home for a couple of days and then fly to England for the NEO Race. Thanks to all my sponsors for the support, Kyosho, MX Racing, Team Orion, Proline, KO Propo, Speed RC, JTP, Upgrade-RC, TD Paint, Lunsford, Liverc.com, Joe Pillars, my Dad and Scott Speed for coming out, my family, and the Good Lord Jesus Christ. Off to the next one!