In nitro Adrien gave me his engine as we weren’t able to get mine to feel right. Q4 and and engine felt good, much more throttle feeling. My car felt good too, but again, I made mistakes. I got a 5th. In electric the story is the same. Going fast, but having 1 or 2 crashes, and it’s not possible to get a top 3 with any crashes.

Into Q5 I changed some things on both cars. Nitro TQ was still up for grabs, and I needed a TQ to get it. The changes I made felt really good and my engine felt the best that it has all week. I was leading early and felt good. Me and Ty were going really fast and I was leading the heat. I made a little mistake halfway through, but didn’t crash and was still fighting. Towards the end I caught up to another car, and I wasn’t patient enough. I thought he was going to go wide before the straight, so I dove inside to pass, but then he didn’t go wide. I slammed my brakes, but still hit him and it spun me out onto the pipe, then I was riding on the pipe and hit a fencing that is there for the big jump. I lost a TON of time and my run was done. I think I got 9th for the round.

Electric the setup changes I made didn’t seem as good. I struggled with pace and then crashed as well. Mark that as a poopy run. 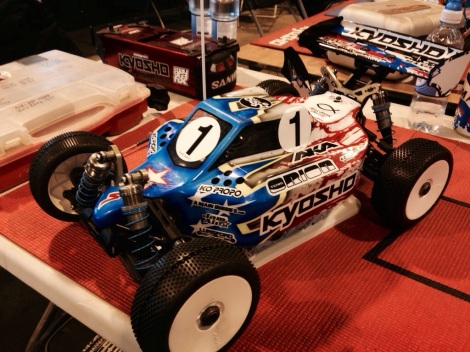 In the warm up for the Semi I felt really good and confident. Lined up and started the race, but I had some nerves going for done reason. All I wanted was a clean main. The second jump I made a mistake and went from 1st to 3rd. I stayed there for a while and slowly caught the leaders. I got passed Bayer, then he put a really aggressive pass and it frustrated me. Then right after that I hit him down the steps and we both went flipping , but I landed on my wheels. I didn’t mean to hit him, but I think I was just giving it too much throttle cause I was mad at his pass. We had words after, but it seemed we saw two different races. Hey….that’s a part of racing, if we all had the same opinion, it would be a one color boring world. After all that Lee Martin had a decent size lead on me. I got back in my groove and started catching him. With 2 laps to go, he got caught up with some lappers and I was really close. He jumped just a hair wide over the corner jump, I aimed for the inside, but went too inside and crashed. Ended up second and had the 3rd fastest overall time. I’ll start 3rd in the final.

I’m really looking forward to racing tomorrow. My TQ streak at Neo ended, but that’s ok, the mains are still to come. Now that one streak is over, I feel some pressure has been taken away.

Hope you all had a great Easter. Bummed I missed all the egg hunts with Megan and Roz, but that’s the job. Thanks for checking in and God Bless.