I’m headed home from a long weekend out in California. It’s been since 2010 that I made it out to OCRC for the Surf City race, and I’m glad I went. Schedule was practice Thursday and Friday, qualifying Saturday, and mains on Sunday.

I flew into OC Thursday afternoon and got to the track around 3pm. Busted my cars right out my bags and hit the track. OCRC feels really odd at first for me, I always start on new tires also, so that’s not a bonus. Thursday was basically just breaking in tires and getting comfortable with the feeling of the track. The track layout was fun and pretty difficult. 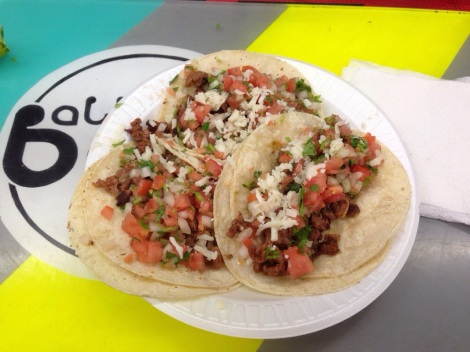 Couldn’t go long without these. Best part about California.

Friday practice got a little more serious and my speed was coming up. My tires were coming in good and I started to work on my cars setups. I really like my RB6 setup on outdoor tracks, but I really struggled with it at OCRC for the Reedy race. I was trying a whole bunch of different things on my RB6. I also worked on my ZX6 from HRS and it was driving much better.

The line in practice was getting pretty nuts though. They were doing 12 drivers for 6 minutes, and the line was about 30-40 minutes towards the middle and end of practice.

Heading into qualifying I was feeling pretty good. My SC and 4wd were feeling good, and my 2wd was getting better and better, but not quite there yet. SC was up first and I had a good run to grab the TQ. 4wd also started out pretty good with a 3rd. I had the TQ in my grasp, but a late crash coming onto the straight dropped me back. 2wd was ok, but I was really struggling at the end of the straight. That was my weak point with my 2wd and where I was working on getting it better. I crashed a few times and got 5th. Q2 in SC wasn’t quite as smooth as Q1 and I made a few mistakes. I was struggling at the end of the straight in SC as well, and I got 3rd. 4wd was pretty much the same as SC and I got 5th. In 2wd I wanted to try a new set of tires. I broke them in on a truer, but I didn’t get enough tire sauce in them. My car was really loose, but I had a clean run, and got 4th. Q3 in SC the TQ battle was between me and Maifield. My truck was feeling good and me, Maifield, and Cav were all close on the clock. Towards the end, Maifield crashed and it was just me and Cav, and I took the TQ by 5 tenths. That also gave me overall TQ which I was happy about. 4wd I was needing a good run to start 2nd for the main. My car was feeling awesome and I was right behind Maifield on the clock. Around halfway I cased a triple and it flexed my chassis enough to pop out my center rear drive shaft. You can adjust the drive cup on the slipper, and I’ve never had that happen, so I had it adjusted with the shaft being able to move too much. Check that off the “something learned” page and move on. I qualified 4th overall for the main. Q3 of 2wd didn’t go how I wanted either. I switched back to my original tires, but I was still terrible at the end of the straight. I crashed a bunch and didn’t better my points. I would start 5th for that main. 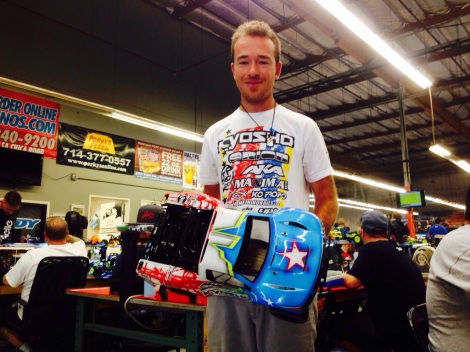 The mains are a little different than normal at this race, bump ups, with single 10 minute A mains. The track seemed to be changing and gaining grip, but it wasn’t going to slicks like it has in the past. There was quite a bit of dust coming up from the groove and I thought a taller pin would be better. I mounted up new tires for all three cars, broke them all in on a truer, just using scotch brite. After that I needed to get sauce in them. After the truer, I washed them, then sauced them and put them in a sealed bag. Let them sit in there for about 2-3 hours. Washed them, and then sauced them 30 minutes before my race. That was the best I could do with the time I had.

4wd main: I changed my shock pistons front and rear, was running new tires, and went from a Typo front, to a Pinstripe front. With a 10 minute main, and a shorty pack, Joe advised me, “only do one warm up lap.” I had no idea what my car was going to feel like. I did a slow first warm up lap to let my tires get comfy with the dirt, and then did a half hard, half slow second lap to get the feel. My car felt pretty good, a little pushy, but the pistons felt much better around the track. I started 4th, and the start was a little wild. I got into the car in front of me a little after the first triple, and we all got pretty tight. After a few laps it settled in and I was in 4th, but I was right there with 2nd and 3rd, and I was feeling good. We all had some mistakes and let Maifield just check out and pull a big lead, around 8 seconds. I got passed Truhe for 3rd and got closer to Cav in 2nd. He crashed after the second triple and I got into 2nd. He was right on me and we drove nose to tail for a while, but with about 3 minutes to go, I heard a sound from Cav’s car. His drivetrain was stripping out, and he had to back off me and try to save his gears to finish. I was able to just stay steady and finish 2nd, 5 seconds back from Maifield. I was much happier with my car, and happy to drive good and take 2nd. 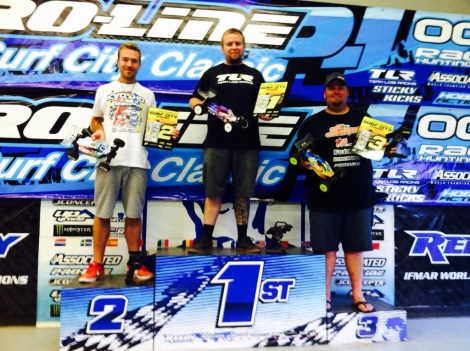 Next main was SC. I was starting 1st and really wanted to take the win. I also ran new tires on this car, but this car felt much more edgy with the higher grip of the track. I bobbled on the second lap at the end of the straight and dropped back a little. The end of the straight was very tough for me during the 10 minute main, but I was able to come back from 5th to finish 3rd. It wasn’t at all what I wanted, but it was a good reminder that I need to get my front end tamed down before the Nationals. 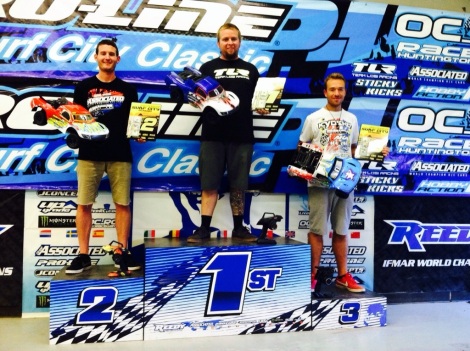 The last race of the night was Mod 2wd Buggy. My car has slowly been getting better throughout qualifying, but it still wasn’t good enough to try to go for the win. I made quite a few setup changes for the main, laid my front shock down, longer rear camber link, and 2.5 thicker oil in the front. I started 5th and got a great start, moving up to 3rd in just a few laps. A few minutes in and Cav made a mistake while running 2nd, and I went by. Maifield had a decent lead, around 4 seconds, but I was really feeling good and he was not getting any further out. My car was better than it has ever been indoor in mid motor. Just past halfway I was still keeping the gap the same and running good, but then a lapped car crashed right in front of me and I got tangled. I had a 2 second gap to Cav, and now that was gone and with it my flow I had. I ended up crashing two times after that and Cav got by and pulled away. Soon after all that, Maifield bobbled and Cav was right there battling for the win with three laps to go. I finished 3rd. I was pretty ticked at myself that I let myself get out of rhythm after tangling with a lapped car. I did get my car much better and my pace was just as good as both Ryan’s, so that’s the positive I took from that main.

Now I’m back in KC and at the doctors with Megan for a little check up with Cole. Oh….we are naming our little dude Cole Randal Tebo 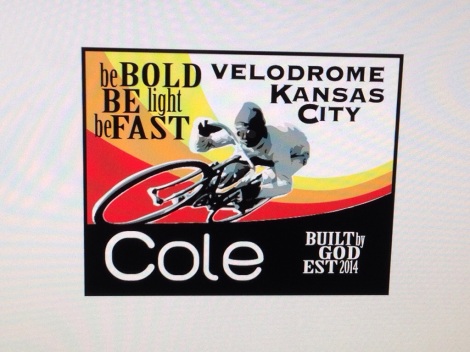 I got a couple cool shots from my seat on the plane today.

This one was over Kansas. Turned out pretty awesome.

This one was right before we landed in KC, someone cut some design in the crops.

Feels great to be home and I feel good going into the 1/10 Nationals in Florida. Thanks to all my great sponsors, Kyosho, Orion, Maxima, AKA, Ko Propo, AmainHobbies, Joe Pillars for all the help, and my family for the love and support. See you all at the next race. God Bless