Hey Guys, last weekend I attended my first Ice Breaker event at Indy RC World, in Dallas, TX. I was excited to go, I had only driven there once before, but that was a long time ago, I always enjoy driving a new track. Joe Bornhorst, Matt Wolter, and myself flew out there Thursday, so we could be ready to rock for Friday’s practice. Friday would be open practice by vehicle, but controlled to 7 minute sessions, and it would start at 11am and run through 5am Saturday morning.

I was racing my normal 1/8 classes, Pro Electric Buggy, Pro Nitro Truggy, and Pro Nitro Buggy. Joe and I took advantage of the practice sessions and drove most of them together, getting to pace off of each other and also getting to learn each other more. Around 3pm – 5pm the line to drive was getting pretty long and the traffic was pretty intense on the track. The track crew at Indy was also watering the track every hour, but after 6pm, the track would not get any more water until the event ended. They did that to break in the track and make sure it packed in and would hold together. We knew that the grip would be much different after the track dried out, so we ended our practice early, and left the track around 6:30pm to get some sleep. We arrived back to the track at 2:15am hoping that the track would be more in race condition and that the line to drive would be much much shorter. The track was dry, grooving up some, so we knew we made the correct decision. There were more people there than I had expected, pretty much a full driver’s stand from 2:30am to 5am. The grip was much higher and lap times were a second faster. 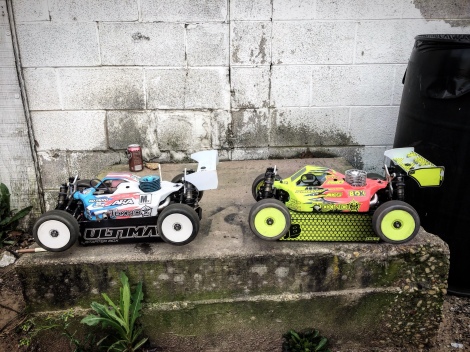 Saturday would be qualifying, 3 rounds of 5 minute qualifiers taking your best two. Ebuggy Q1 would be an ok run, with a couple bobbles and finishing 2nd for the round. The heats were not seeded, so the top drivers, Joe Bornhorst, Adam Drake, and myself, we were spread out and not in the same heats. Q1 Truggy and Nitro Buggy I would have good runs and take the TQ in both. I was on a pretty good roll and would start out Q2 with a TQ in Electric Buggy. I wanted to get Truggy and Nitro Buggy wrapped up, but I wasn’t able to get the TQ in either, Drake got Truggy Q2 and Bornhorst with Nitro Buggy Q2. My cars were feeling good, the traction of the track had kinda settled, losing some traction compared to the early morning practice. I started to sauce my tires and I wasn’t sure if that was working for me or not. Going into Q3 I had a great chance to TQ all 3 and that was what I wanted to do, I wanted to start first in the mains and be able to just focus on me. They did a resort, so the heats would be much cleaner and the pace would most likely be faster. Q3 of Pro Electric Buggy I crashed on lap one, so I was put in a situation where I needed to push hard. My Tekno EB48.4 was working awesome and I was getting close to the leader on the clock, but I wasn’t able to take the lead, finishing 2nd. I had tied on points with Drake, but I had the faster single time, so I took overall TQ. Q3 of Pro Nitro Truggy I made a couple changes to my truck and just wasn’t as fast. I barely finished ahead of Drake, but Bornhorst was the fastest and got the TQ. Joe and I tied on points, but Joe had the faster single time and took the overall TQ, I would be 2nd. Q3 of Pro Nitro Buggy. You could tell that both Joe and I really wanted the TQ, and Joe was on a pretty good roll, it would be a fun race. I bobbled early and we paced each other the whole qualifier, running nearly the same lap times. My early mistake cost me, and Joe ran clean and beat me by 1.5 seconds to get the overall TQ, with me starting 2nd. We were at the track for 20 hours on Saturday … I was COMPLETELY WHOOPED! 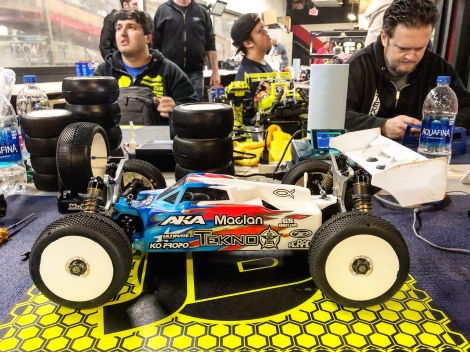 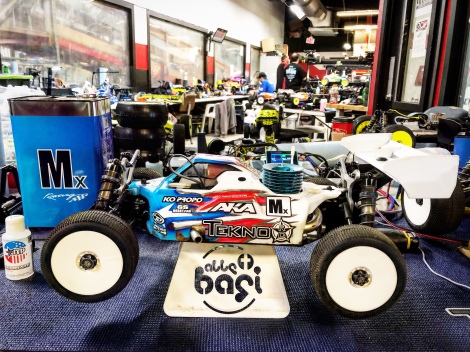 A1 Pro Electric Buggy : The first start I got away clean, then Drake, who started in second crashed after the second turn, causing a pretty big pile up. They decided to call a restart, which I thought was very strange. For the second start, everyone got away clean and the race was underway. Drake and I had a great battle, I could not pull away from him at all, he passed me, then I passed him back. Whoever was in second seemed to be faster. I jumped a little wide on a jump with a minute to go, Adam put a nice inside pass on me and I couldn’t get him back. I was bummed I didn’t get the win, but it was a fun and clean race.

A2 Pro Electric Buggy : I changed up my tire prep a little, also went from AKA SSLW P1 to SSLW DoubleDown. My car was feeling good in the warm up lap, I was ready to battle and try to get the win. Adam passed me right away when I cased the back jump, but I was super close and putting pressure back on him. Just a few laps later, he would bobble in the same section and crash, handing me the lead. My pace in this main was much better and I was able to pull a big gap and win A2 by 15 seconds.

A3 Pro Electric Buggy : Really happy with my tire swap, I didn’t change anything for A3. I got a good start, Adam crashed early and that let Joe Bornhorst get into second. My pace again was fast and I pulled away to win A3 and the overall win!

Pro Nitro Truck : Unfortunately I would actually miss the start of the 45 minute main. Before the main, I wanted to change my shock oil, and I had forgotten to tighten one of the rear shock caps. When setting my ride height, one of my rear spring collars seemed to be turning easier than normal, but I wasn’t paying enough attention. I was actually loosening up my shock cap, not adjusting my spring collar. During the warm up, the oil came out of that shock and I felt my truck change. We ran back to fix it, but the race organizers and director had said that no time would be given to racers in the mains. I didn’t really know what to do, people were not in the pit area, I didn’t have time to refill the shock, and I didn’t have a spare. Jared Wiggins grabbed the first Tekno Truggy he could find, we swapped the shock, and I started the race 2.5 laps down. I was super mad inside, didn’t drive good for the first few minutes as I needed to calm down some. My truck was driving ok, but I could tell that the shock was not setup the same as mine. Turned out after the race that it had a spring that was two rates softer, had a bladder, and who knows what piston and oil. I got into my groove, started to click off laps and I had a goal of finishing 3rd. After halfway I had moved up to 3rd, but I was still down two laps to the leaders, Bornhorst and Drake. They were having a great battle for the lead, but then Drake made a costly mistake with just a few minutes left in the race. He ended up in pit lane after going on two wheels in the sweeper, then jumping out of pit lane, he caught a pipe nail and ripped the rear end off. I moved into 2nd and finished the main 1 lap down to Bornhorst. I had mixed emotions after, happy to still finish 2nd, but pretty mad that I made that mistake and cost myself the chance to battle for the win. My pace was great, my AKA tires felt good, we executed the 9 minute pit strategy easily … I just messed up and wasn’t able to fix it in time to make the start. Thanks to Dillon Caldwell and Jared Wiggins for the pit stops.

Pro Nitro Buggy : I was not happy after Truggy, and I was ready to fight hard for 45 minutes and do everything I could to secure that win. My fuel mileage was going to be pretty tight to pit a 9 minutes, but I wanted to take the risk and I was confident that I could manage the throttle and not run my car out of fuel. My Tekno NB48 felt awesome in warm up, AKA SSLW DoubleDown tires were hooked up, and my MX B2R was tuned perfect. I got a good start, but bobbled a little a couple laps in. I dropped back just a little, but then was able to reel Bornhorst back in. We had a good little battle, going back and forth a couple times before the first round of pit stops. Joe went for the 8 minute strategy, and I kept to my 9 minute strategy. I was fully into my groove now and I picked up the pace and the consistency. The race went perfect, I charged hard for 45 minutes, kept to my strategy and took the win by 2.5 laps over Bornhorst and Drake was another lap down in 3rd. I was super happy with the race and to take the win. Eddy Doggett and Aaron Royston did great in pit lane, it was a cool win for sure. 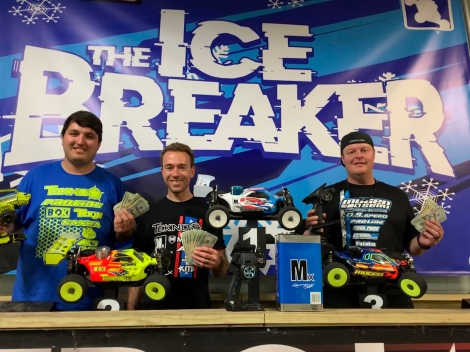 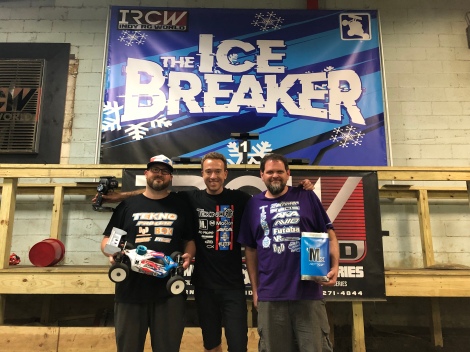 See you guys at the next race, thanks for reading, and God Bless!