Saturday at the Reedy Race saw two rounds of 2wd, a 4wd practice, and then two rounds of 4wd. It was an up and down day to put it in short. A Frustrating and testing day as well.

2wd R5 I started fourth and got a good start. Moved my way up to second with a good pass on an AE driver. With the little controversy with an AE driver on Friday, people were cheering for him to go after me. He didn’t disappoint and roughed me up in a corner followed by crossing lines across my front end to send me off the track on the front jumps. The crowd cheered as he did what they wanted to see. I ended up 5th and with that, my chance at overall pretty much over.

2wd R6 I started first and got beat on the start. I was second for a few laps, but made a great pass and just checked out. My car felt great and I took a very easy win.

After 2wd I was sitting fifth overall.

The only thing I miss about California is the Taco trucks. Had some amazing tacos and then put my mark on my favorite truck. 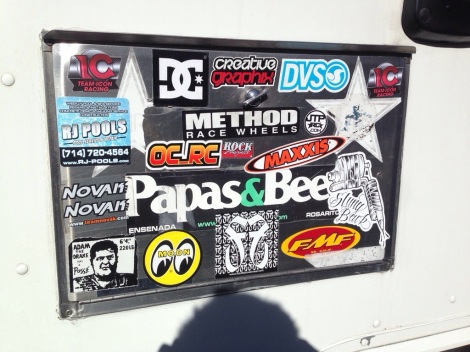 Then it was time for 4wd. My car felt really good in the practice and I was feeling really excited to start racing.

4wd R1 I started tenth. I got a good start and was just making my way through the pack. By lap four I was up to third and then I landed off the front jump section and my car just rolled to a stop. My motor wires were down by my switch and somehow turned my switch off. We are not allowed to join the race if you come off the track, so I got tenth.

4wd R2 was going to be a hard race. I started ninth and had Cav, Maifield, and Evans all ahead of me. I got caught up in a little first turn pile, but it wasn’t bad. Made some moves and got to fifth about two minutes in. Then my car started clicking really bad, I had a gear stripping. I drove smart and started only pulling half throttle and not hitting the brakes. I saved the car and finished fifth, which was better than another tenth, but now I have a fifth I have to take. A center drive cup came a little loose and my mesh in my rear diff changed. My car feels extremely good and fast, hopefully I can show my speed on Sunday.

Thanks for checking in and God Bless.